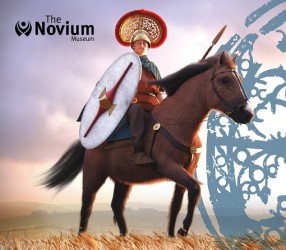 Opening on Saturday, 25 January 2020 at the Novium Museum, Chichester

'In more than thirty years of archaeology this is the most spectacular discovery that I have witnessed' - James Kenny, District Archaeologist.

The secrets of an Iron Age warrior, who may have fought alongside King Commius during Julius Caesar's wars with the Gauls, will finally be told through this major exhibition.

The 'Mystery Warrior' was discovered 12 years ago by Thames Valley Archaeological Services Ltd. This was found during archaeological investigations, prior to the construction of Berkley Homes' Bersted Park.

Arguably the most elaborately equipped warrior grave ever found in England, archaeologists believe he was a refugee French Gallic fighter who fled Julius Caeser's Roman Army as they swept across continental Europe around 50BC.

After years of conservation and scientific analysis, the artefacts are now ready to finally be displayed at The Novium Museum.

Due to the significance of the artefacts, a team of world class experts has been working with The Novium Museum, to analyse and interpret the finds to tell the story of this incredible individual.

The 'Mystery Warrior: The North Bersted Man' exhibition will open on Saturday, 25 January 2020 and will be the first time that this extraordinary Iron Age Warrior and his burial possessions will be on public display. The exhibition will explore the life, health and death of this fascinating man. It will attempt to explain some of the questions that have been raised by the circumstances of his burial. It will illuminate a critical point in Britain's history - the years immediately preceding the Roman invasion, when the south coast was at the heart of the great events that ultimately shaped Britain as a nation.

The exhibition will open to the public on Saturday, 25 January 2020 and will be the first time that this extraordinary Iron Age Warrior and his burial possessions will be on public display.

The Novium Museum has programmed a range of free activities and events such as family days, lectures and community days to accompany the exhibition.