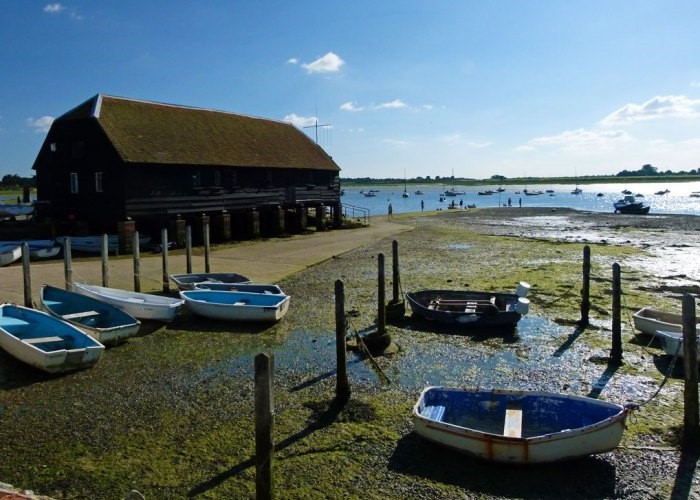 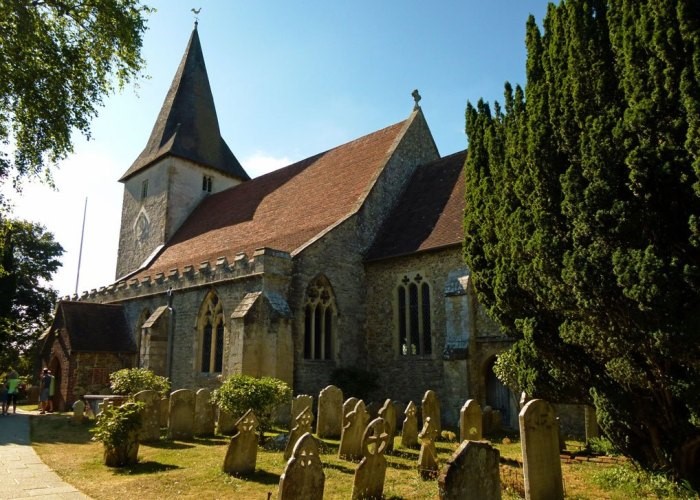 For centuries, Bosham was a fishing village, famous for its oysters.  You’ll find it on a small peninsula in Chichester Harbour in West Sussex; a bit of a yachting place, also beloved by artists, walkers, cyclists and casual visitors.  Yes, Bosham (say ‘Bozzum’) can be a busy spot, particularly on a fine day.  There are a couple of pubs, a popular art and craft centre and several tea rooms.  Picturesque, with neat, well-mannered houses, all-in-all, Bosham is a great destination for a weekend drive out.  At low tide, it is possible to motor around the foreshore; at high tide, your car would be submerged.  Thus, received wisdom is to be careful where you leave your vehicle – I favour the car park (hang the expense).  Chichester Harbour itself is a Site of Special Scientific Interest, an internationally renowned wetland visited by various breeds of migrating wildfowl.  Hence, watch out for lurking twitchers too.

But, whatever its numerous attractions, this charming little village on England’s south coast has always been labelled in my mind as ‘the place where a king’s young daughter is buried’. So, as you’ve probably guessed, it’s somewhere that history-lovers enjoy as well.

The site has been inhabited since Roman times, and is close to the famous palace at Fishbourne. Several important Roman buildings have been found in northern Bosham around Broadbridge including a possible temple, a small theatre and a mosaic.  The Bosham Head

(displayed in the Novium Museum) , part of the largest Roman statue from Britain was found nearby. A legionary helmet was found in Bosham harbour and is now in Lewes museum. The helmet is of late Claudian date, the time of the invasion.

Tradition holds that Emperor Vespasian maintained a residence in Bosham, although there is no evidence of this. There are also said to be remains of a building popularly thought to be a villa belonging to Vespasian, at the Stone Wall in the parish. Pottery and tile fragments, of both Roman and early British period, have been discovered in the area, confirming pre-Anglo-Saxon activity. The possible Roman harbour here was part of the natural harbours between Portsmouth and Chichester known as Magnus Portus 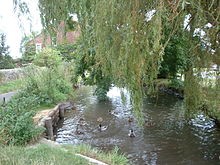 The mill-stream where King Canute's daughter is reputed to have drowned.

Most of Bosham's history during the Middle Ages is ecclesiastical. Bede mentions Bosham in his book The Ecclesiastical History of the English Nation, speaking of Wilfrid's visit here in 681 when he encountered a Celtic monk, Dicul, and five disciples in a small monastery. The village is one of only five places that appear on the map attached to the Anglo-Saxon Chronicle of around this time.

In 850, the original village church was built possibly on the site of a Roman building, and in the tenth century was replaced with Holy Trinity Church, situated beside Bosham Quay, that still serves as the local place of worship. There is a tradition that a daughter of Canute the Great drowned in a nearby brook and was buried here, although there seems to be little evidence for this. The tradition was originally linked to a fourteenth- or fifteenth-century effigy. In 1865 a coffin containing a child's skeleton was discovered, buried in the nave in front of what is now the chancel of Holy Trinity Church. This was thought to be Canute's daughter. 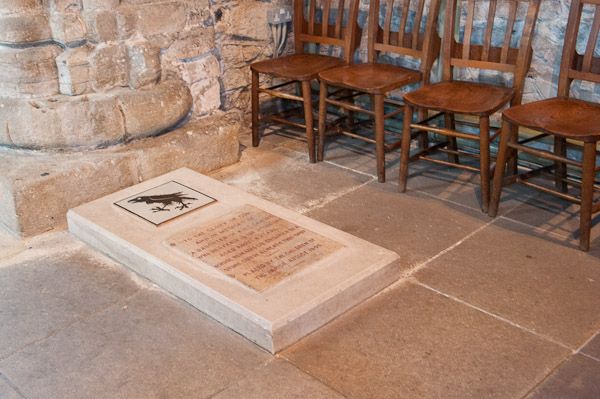 There is also a tradition that Canute had a palace in the village, perhaps where the Manor House now stands, or possibly at the harbour's edge, but no evidence has emerged. Legend has it that Bosham was the site at which he commanded the waves to "go back", so as to demonstrate to his overly deferential courtiers the limits of a King's powers.

There is also a legend that around this time Bosham Church was plundered by Danish pirates, who stole the tenor bell. As the pirate ship sailed away, the remaining church bells were rung. The tenor bell miraculously joined in, destroying the ship. The bell is still said to ring beneath the waters whenever the other bells are rung.

In the Bayeux Tapestry's second scene, "Where Harold, Earl of the English, and his knights ride to Bosham Church."

Bosham is mentioned by name in the Bayeux Tapestry, referring to the 1064 meeting of Harold and Edward the Confessor on the way to meet William of Normandy to discuss who would succeed Edward to the throne. Harold's strong association with Bosham and the recent discovery of a Anglo-Saxon grave in the church has led some historians to speculate that King Harold was buried here following his death at the Battle of Hastings. The speculation began in 1954, when the nave was re-paved, and the body of King Canute's reputed daughter was re-examined. It was discovered that the body of a richly dressed man was buried beside the child's. A request to exhume the grave in Bosham church was refused by the Diocese of Chichester in December 2004, the Chancellor ruling that the chances of establishing the identity of the body as that of Harold Godwinson were too slim to justify disturbing a burial place.

The Domesday Book (1086) lists Bosham as one of the wealthiest manors in England. It included the nearby village of Chidham. Bosham was confirmed to be in the possession of Osbern, Bishop of Exeter, who had been granted the land by his kinsman, Edward the Confessor. It possessed 112 hides (13,000 acres) in different parts of the country.

For Bosham is an ancient settlement, somewhere to get a sense of English ancestry. The Domesday Book had it listed as Boseham in 1086 – a Saxon name meaning bosa’s homestead.  In 731AD it was Bosanham.  It must have been called something else before that – its pedigree dates back to Roman times, at least.  The Romans used Chichester Harbour as a port and Vespasian, prior to becoming emperor, is reputed to have had a villa in Bosham itself.  The first parish church dates from 850AD, was allegedly constructed over a Roman basilica (a public building used for meetings) and the fabulous Fishbourne Palace

is a near neighbour.  An enormous sculpted marble head, surprisingly known as ‘the Bosham Head’

, much eroded and weighing 375lbs (170kg) was found in a garden in 1800.  It is now thought this could have been part of a twice than life-size statue of the Emperor Trajan that once stood at the entrance to the harbour.  The basilica claim might sound a little exaggerated, but the Romans were certainly in Bosham and there’s no escaping the fact that humans have been hanging around the place for a very long time.  Chichester, or Noviomagus Regnorum, fell to marauding Saxons in the 5th century and civilisation in these parts took a step backwards.

However, skipping ahead a few centuries, Bosham is reputed to be the oldest established Christian site in Sussex.  St Wilfred brought Christianity to the South Saxons sometime around 680AD –

“There was, however, a Scots* monk named Dicul who had a very small monastery at a place called Bosanham, surrounded by woods and the sea, where five or six brothers served the Lord in a life of humility and poverty: but none of the natives was willing to follow their way of life or listen to their teaching.”

Wilfred  , with the blessing of the Church of Rome behind him, naturally had far more luck with the local pagans than poor old Dicul did.  He did get it to rain for the first time in three years, but he also taught the people how to fish.  Wilfred

went on to found a monastery at Selsey, just down the coast from Bosham. Dicul’s probable site of the ‘monastery’, undoubtedly a very simple affair, is just north of the church, now under someone’s house.

In time, a small church college flourished in Bosham, surviving until 1548; though along the way, the clergy were often up to no good.  For example, in 1384 complaints were made about the vicar, one Robert Dygby, who was leading a dissolute life, frequenting taverns and so forth in Chichester, and being so obnoxious that his brothers used to avoid him.  It was later reported that he was living openly with a widow in Bosham.  Another vicar assaulted and tried to murder the sexton

In the Holy Trinity Church, adjacent to the quay which dates from the 10th century and, inside, just to the right of the Saxon chancel arch is a memorial stone, with the black raven of the Royal House of Denmark on it.  The inscription reads:

Placed By The Children Of
The Parish August 1906

Here is a sad reminder of the real people that came before us, a thousand years ago. There is a long tradition that a young daughter of Cnut’s (or Canute, a much safer spelling when you’re in a hurry) fell into the nearby millstream and drowned in the year 1020. The millstream is still there; it has been, apparently, since the Romans dug it.  Cnut, King of Denmark and Norway, was King of England from 1016-1035. He pursued his claim to the English throne in September 1015 by arriving in Kent at the head of an army of 10,000 salivating Scandinavians.  Sailing round the south coast, it is said they laid waste to the counties of Dorset, Somerset and Wiltshire, waging a series of battles against the Saxons under Edmund Ironside.  Cnut became King of all England on Edmund’s death in 1016. And ironically, on his own death in 1035, he was buried in Winchester, ancient capital of the West Saxons. But why would this Danish king be in tiny Bosham? Because, it is said, he had a palace in, or nearby. In that case, Bosham becomes a place of some significance and it is thought to be here that Canute attempted to control the sea at the insistence of his courtiers.

Bosham Church is depicted in the Bayeux Tapestry, the enormous piece of embroidery commissioned just a few decades later by the Normans to tell their tale of the Battle of Hastings.  An early scene shows where Harold, leader of the English, and his mounted soldiers ride to Bosham Church before Harold became king. Earl Godwine, Harold’s powerful father and a close friend of Cnut’s, had a manor there. In 1053, when Godwine died, Harold inherited; so Bosham would have been his home and port.

Harold is said to have sailed from Bosham across the English Channel in 1064, a voyage that ended up with him meeting Duke William of Normandy, though whether this get-together was intentional or not is unknown.  Anyway, there in the Bayeux Tapestry is Bosham church, the chancel arch, or one very much like it, clearly identifiable.  The tower of Holy Trinity is mostly Saxon, constructed from the late 10th to the middle of the 11th century, so it would have been there when Harold dropped by.  The top of the tower is Norman and the spire is 15th century.  The church is actually a gem, full of wonderful features including a 12th century font, late 13th century effigy of a child (did that represent Cnut’s daughter?) and a 14th century crypt (possibly once used as a charnel house), though the magnificent chancel arch dominates when you enter. 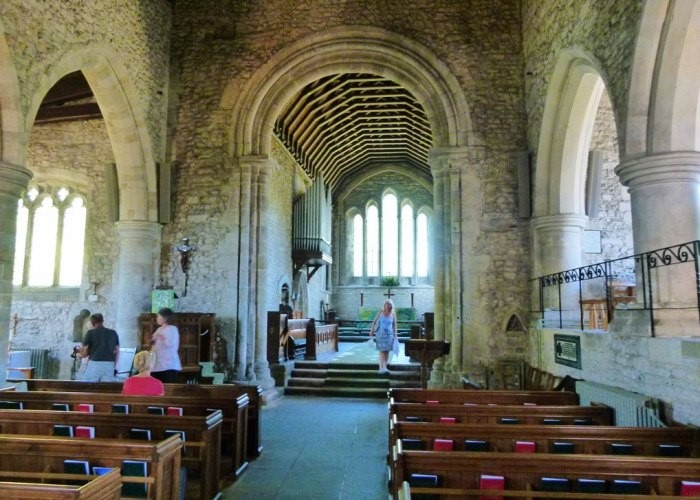 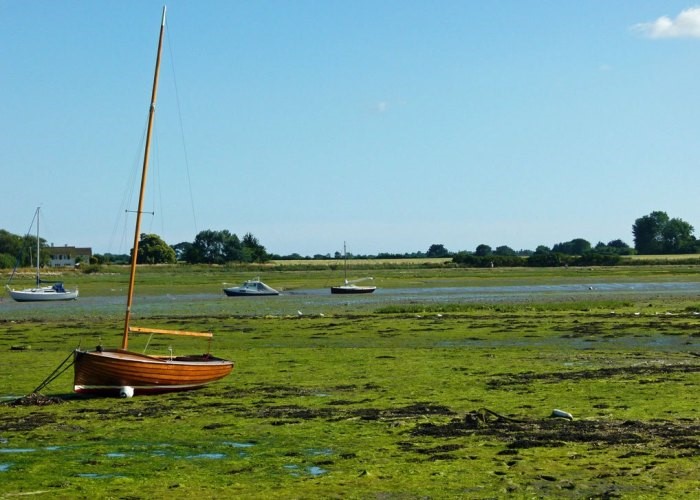