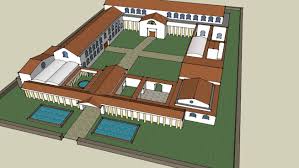 Fishbourne Roman Palace is in the village of Fishbourne, Chichester in West Sussex. The palace is the largest residential Roman building discovered in Britain and has an unusually early date of 75 AD, around thirty years after the Roman conquest of Britain. Its many superb mosaic floors dating from this period make it even more exceptional. Much of the palace has been excavated and is preserved, along with an on-site museum. The rectangular palace surrounded formal gardens, the northern parts of which have been reconstructed. Extensive alterations were made in the 2nd and 3rd centuries when many of the original black and white mosaics were overlaid with more sophisticated coloured work, including the perfectly preserved dolphin mosaic in the north wing. More alterations were in progress when the palace burnt down in around 270, after which it was abandoned. 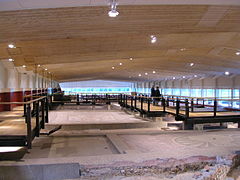 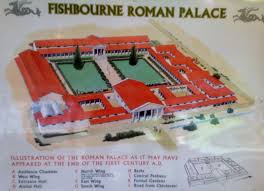 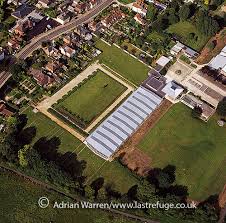 In 1960 the archaeologist Barry Cunliffe first systematically excavated the site, which had been accidentally uncovered by an engineer working for Portsmouth Water Company who was laying a new water main across a field. The Roman villa excavated by Cunliffe's team was so large that it became known as Fishbourne Roman Palace, and a museum was erected to protect and preserve some of the remains. It is similar in size to Nero's Golden House in Rome or to the Villa Romana del Casale near to Piazza Armerina in Sicily, and in plan it closely mirrors the basic organisation of the emperor Domitian's palace, the Domus Flavia, completed in AD 92 upon the Palatine Hill in Rome. Fishbourne is by far the largest Roman residence known north of Italy. At about 500 feet (150 m) square, it has a larger area than Buckingham Palace A modern museum has been built by the Sussex Archaeological Society, incorporating most of the visible remains including one wing of the palace. The gardens have been planted using authentic plants from the Roman period

The location of Fishbourne, in proximity to Chichester (Noviomagus Reginorum), is often looked in discussions ln the opulent wealth represented at Fishbourne as well as solidification for the claim of Cogidubnus as the villa owner. The city of Chichester was in the heart of the dominant Atrebates tribe, but their early introduction to Roman imperialism created a pseudo-friendly relationship between the Romans and the Atrebates. The tribal people in the area were later called the Regnii after being ruled by Roman client kings for so long. 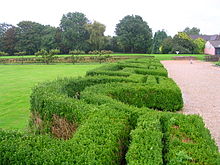 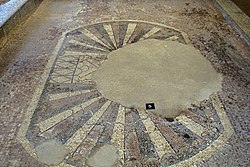 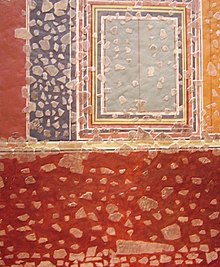 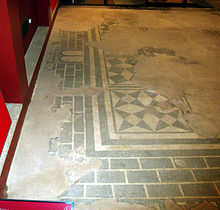 Initially buildings on the site were granaries, over 33m long, apparently a supply base for the Roman army constructed in the early part of the conquest in 43 AD. Later, two residential timber-frame buildings were constructed, one with clay and mortar floors and plaster walls which appears to have been a house of some comfort.

These buildings were demolished in the AD 60s and replaced nearby with an elaborate and substantial stone-walled villa, or proto-palace, in about 65 AD which included a courtyard garden with colonnades and a bath suite, together with two other buildings, and using material taken from the earlier buildings. It was decorated with wall paintings, stucco mouldings and marble polychrome panels. The life-size head of a young man carved in marble, found during excavations in 1964, and identified as a likeness of Nero aged 13 created at, or shortly after, his formal adoption by the emperor Claudius in AD 50] probably originated from the proto-palace. Foreign, probably Italian, craftsmen had to be employed at this early period. This building was not unique in this area as the villa at Angmering was similar in many respects and suggests a number of aristocrats living in the area who must have used the same workforce.

The full-size palace with four residential wings surrounding a formal courtyard garden of 250ft x 320ft was built in around 75–80 AD and took around 5 years to complete, incorporating the proto-palace in its south-east corner. Massive levelling of the vast site reached up to 5ft in places. The gardens were surrounded by colonnades in the form of a peristyle.

The north and east wings each consisted of suites of rooms built around courtyards, with a monumental entrance in the middle of the east wing. In the north-east corner was a huge aisled assembly hall. The west wing contained state rooms, a large ceremonial reception room, and a gallery. The south wing probably contained the owner's private apartments although the north wing has the most elaborate visible mosaics. The palace included as many as 50 excellent mosaic floors, under-floor central heating and an integral bathhouse. The garden was shown to contain elaborate plantings of shaped beds for hedges and trees with water supplies for fountains. In addition, the south wing overlooked a vast artificial terrace laid out as a rectangular garden extending 300ft towards the sea where there was a quay wall. This garden was planted as a "natural" landscape with trees and shrubs, and with a pond and stream. It also had colonnades on at least one side. 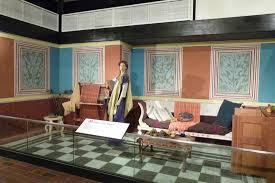 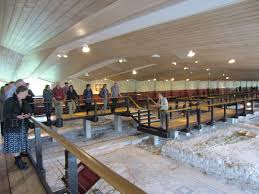 Decoration of the palace was elaborate, including wall paintings, stucco mouldings and opus sectile, marble polychrome panels examples of which are in the museum. As in the proto-palace, foreign craftsmen had to be employed at this early period.

The palace outlasted the original owner and was extensively re-modelled early in the 2nd century, and maybe subdivided into two or more separate villas with the addition of baths suite in the north wing. A remarkable new Medusa mosaic was also laid over an earlier one in the centre of the north wing in about 100 AD.

In the middle of the 2nd c. AD, further major redesign included demolition of the recent baths’ suite and the eastern end of the north wing, probably due to subsidence from underlying earlier infill. New baths were built in the garden and peristyle in front of the east wing and a wall across the garden enclosed the northern half. The north wing was also extensively altered in plan, with 4 new polychrome mosaics including the Cupid mosaic dating from about 160 AD.

Further redevelopment was done at times in the late 3rd century. The final alterations were incomplete when the north wing was destroyed in a fire c. 270 AD. The damage was too great to repair, and the palace was abandoned and later dismantled. It is not known whether the fire was accidental, set by coastal raiders or part of a more widespread period of disruption caused by the revolt of the 'British' emperor Carausius in the 280s AD

Owner of the Palace

The accepted theory, first proposed by Barry Cunliffe, is that the early phase of the palace was the residence of Tiberius Claudius Togidubnus (or Cogidubnus), a pro-Roman local chieftain who was installed as king of a number of territories following the first stage of the conquest. Togidubnus is known from a reference to his loyalty in Tacitus's Agricola, and from an inscription commemorating a temple dedicated to Neptune and Minerva found in nearby Chichester Guildhall. Another theory is that it was built for another native, Sallustius Lucullus, a Roman governor of Britain of the late 1st century who may have been the son of the British prince Adminius. Two inscriptions recording the presence of Lucullus have been found in nearby Chichester and a redating,  of the palace to the early AD 90s, would fit far more securely with such an interpretation. If the palace were designed for Lucullus, then it may have only been in use for a few years, for the Roman historian Suetonius records that Lucullus was executed by the delusional emperor Domitian in or shortly after AD 93. Other theories suggest that owner of the palace was either Verica, a British client king of the Roman Empire in the years preceding the Claudian invasion, or even one Tiberius Claudius Catuarus, whose gold signet ring was discovered nearby in 1995